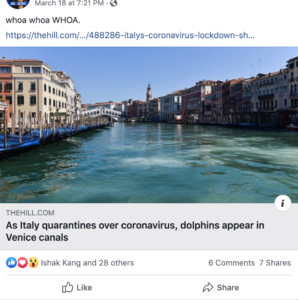 In the midst of the world’s most nerve-wrenching crisis in generations, so much content is available that it’s hard to know what is fact, fiction or just way off base, baffling some of the most intelligent people I know. My passion for fact-finding inspires my life and work, so we have put together a selection of issues unique to COVID-19 to clear the record.

I cannot help myself from also taking a moment here to acknowledge how all of us on the planet are sharing a common experience that has the potential to bring us together. I hope we can use this as an opportunity to practice empathy, patience and forgiveness.

The Coronavirus is natural. It was not created in a lab.

Starting in January, news articles, tweets, Facebook groups and other messages throughout social media pushed ideas about a lab that studies biological weapons either on purpose or accident released the virus into the public. While Scientists are still determining the precise place the virus started, many believe it came from a market in Wuhan. However, conspiracy theorists took it to the next level and 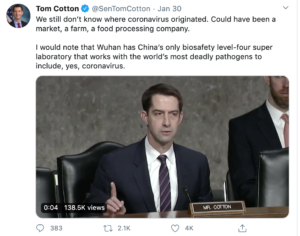 Senator Tom Cotton promotes false rumors made a connection to the Wuhan National Biosafety Laboratory a few miles from the market. From there, some theories said that the Chinese government released the virus into the public, others said that a scientist from a North Carolina lab brought it to the Wuhan lab, and even Bill Gates was involved as a funder. The theory received credibility from a tweet by the Chinese foreign ministry information director Lijian Zhao and others by U.S. Senator Tom Cotton.  It turns out that scientists throughout the world have determined that the molecular structure of the virus is one that can only occur naturally and cannot be genetically engineered.

The coronavirus is not connected to the 5G network

In November 2019, China turned on some of its first 5G Networks; in December 2019, the COVID-19 coronavirus originated at a market in Wuhan, China. We’ve actually been using similar radio signals all over the world for years, for a variety of purposes, with no negative impact. All existing 4G cell networks, Wi-Fi, and microwave ovens use signals in the same range, so if those signals could cause some sort of metabolic change in animals or people, we would all have experienced and dealt with it long ago.

There is no evidence of mass cremations in China

Several newspapers have claimed that satellite images showing high levels of sulfur dioxide above China are possible evidence of mass cremations of people who have died from coronavirus. They are not actual satellite images, and they do not show actual, observed data. NASA, which provided the data in the first place, has said that they are merely forecasts based on weather patterns and historical information about sulfur dioxide emissions. Simply put, predictions are not descriptions, so there is no merit to this claim.

It’s unlikely to contract COVID-19 from a package in the mail.

According to the CDC, “There is likely very low risk of spread from products or packaging that are shipped over a period of days or weeks at ambient temperatures.” Previous coronaviruses have been able to stay on various surfaces such as metal, glass, or plastic for as long as nine days; however, the surfaces used for shipments are not ideal for the virus to survive. It’s rather difficult for viruses to remain viable on or within shipped packages due to the unpredictable and evolving nature of environmental conditions associated with the entire parcel process.

No evidence of vitamins and supplements preventing you from contracting COVID-19.

At this point, there is no evidence to suggest that any vitamins or supplements can provide immunity against this novel coronavirus. Certain vitamins, such as vitamin C – and supplements such as zinc, green tea, and echinacea – can strengthen and support your immune system. But these over-the-counter products can’t even prevent the common cold; they can only possibly shorten the duration. Be careful not to take too much of any of these products, though, as some may actually have adverse side effects when consumed in large quantities.

It is still unclear whether you can contract COVID-19 a second time after surviving it the first time.

At present, it is not entirely clear whether those who are affected by the virus once will again be at a later point in time, or if those individuals might instead relapse or not make a full recovery from the initial infection. According to medical experts around the globe, testing inaccuracies, including false positives, as well as infections going dormant and then re-emerging are likelier possibilities than reinfection. Although, In these early stages, it is conceivable that the virus could mutate, thus making it different enough for a person who had acquired immunity to a previous strain or iteration to become infected anew.

Corona Beer sales have not dropped

Surveys and marketing researchers have shown that Corona’s brand reputation has taken a dip as of late. This could partly be a timing issue – Corona is closely associated with beach season, and for much of the world, it is not beach season. But also, Corona released a hard-seltzer campaign using the slogan “coming ashore soon” shortly after the virus had spread from China to 55 countries, creating a 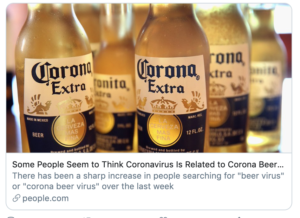 Dolphins and swans have not “returned” to the canals of Venice, Italy

As Italy became the country most impacted by the outbreak, outside of Asia, people started sharing images and videos of wildlife on social media, commenting on how the imposed quarantine had led the animals to come back to places like the now-uncrowded Venetian canals. Sadly, for these Italians looking for hope, many of these documented creatures were actually found in locales where they have previously been spotted, such as Sardinia, an Italian island in the Mediterranean, not Venice.

Free baby formula is not being provided

A number of major formula producers in the United States and the United Kingdom have dispelled this rumor. In fact, if you call Gerber’s parent resource center hotline, the following message plays: “We are aware of a rumor circulating on social media that states there are free cases of formula available if you call and request them. While we are more than happy to suggest retail partners to you to help you locate our products, we do not have any sampling programs available at this time.”

Ibuprofen does not amplify the symptoms of COVID-19.

Oliver Veran, France’s health minister, recently tweeted that anti-inflammatory drugs like ibuprofen and cortisone could potentially worsen a coronavirus infection; he added that patients should consult their doctor if they’re already taking such drugs. The World Health Organization and other leading agencies say there is no evidence, published or otherwise, to support this claim. The U.N. health agency has also stated that it is actually fine to use it for the treatment of fever in people currently dealing with the virus.