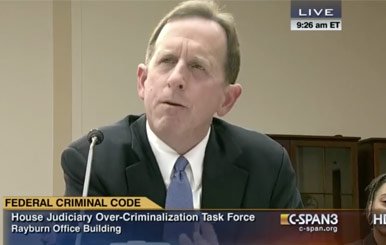 For our blog this month, I sat down with Cline as he shared some of the pivotal moments that have shaped his outlook on law.

Cline graduated from the University of Texas School of Law and then clerked for the Hon. Homer Thornberry on the U.S. 5th Circuit Court of Appeals. He went on to join the DC office of Williams & Connolly, becoming partner in 1994. In 1997, he became a shareholder with Freedman Boyd Daniels Hollander Goldberg & Cline P.A. in Albuquerque, NM, and in 2004 joined Jones Day as a partner in its San Francisco office. In 2010, Cline formed his solo practice. Over time, Cline established himself as one of the top white-collar criminal defense attorneys in the nation, representing such notable clients as Oliver North, Wen Ho Lee and I. Lewis “Scooter” Libby.

Earlier this month, Cline helped his client win acquittals on 10 of 11 federal charges, including money laundering, mail fraud and drug trafficking, in a case The Dallas Morning News called the nation’s largest synthetic marijuana prosecution. His client was facing a life sentence.

Why did you go into criminal law?
I was an English major in college. I was in a graduate program at the University of Texas. About midway through that I realized I didn’t want to be an English professor and law seemed like a natural alternative. Part of the reason I went into law was because unlike teaching English, it married reasoning and intellect with real life. Criminal law seemed particularly that way. The facts of the cases were interesting. Almost every criminal case involves Constitutional issues so you’re dealing with the gritty reality of human existence and at the same time you’re dealing with the Constitution, the Fourth Amendment, the Fifth Amendment, the Sixth Amendment, the loftiest stuff. I found that utterly fascinating.

I liked the idea of standing as an obstacle between a very powerful government and a powerless individual, which is always the case in criminal cases. But I also just thought it was really interesting. Unlike other areas of law that might be more lucrative but would be boring ultimately, I figured that criminal law would always be interesting, and that’s been true.

What was your most important lesson as a young lawyer?
The first important lesson that I recall: I clerked for a 5th Circuit judge right out of law school, Judge Homer Thornberry. As I was leaving my clerkship, the one piece of advice he gave me—which was a wonderful piece of advice—was don’t forget that as a lawyer you’re an advocate. As a law clerk, you act like you’re a judge even though you’re not. You’re weighing arguments and drafting opinions taking into account both sides. When you become a lawyer and you are representing someone, you are an advocate and it’s a whole different thing. It took me a while to realize how wise that was.

What was the most important case of your career?
I mean it: there is no most important case. Some cases are higher profile than others. Some cases may have larger implications than others but winning a case for someone you’ve never heard of, or fighting as hard as I can and getting the best result for the person in a case that has no implications at all is just as important as doing well in Oliver North’s case. I worry about them just as much.

Ok, then which is the case that keeps coming back for you that influenced you in some way? One that’s shaped you differently, the way you approach law?
The Holy Land Five case. We had a first trial in 2007 and ended up with some acquittals, no convictions and a hung jury, which was a very good result. The government retried the case in 2008 and tweaked its case in four key respects, [introducing] four pieces of new evidence. They got convictions on all counts against all the clients. The defendants who were never associated with any violent acts effectively got life terms.

We took it up to the 5th Circuit. The Court of Appeals finds four errors in the trial, and it happened to be the four differences between the first trial where nobody got convicted and the second trial when everyone got convicted. Then the court said those four errors, viewed cumulatively, were harmless. That decision was the most intellectually dishonest and despicable judicial act I’ve ever seen. It changed my opinion of law, judges, courts and the world dramatically. I thought seriously about quitting the practice of law. I was so disgusted by that, and so convinced of the unfairness and lack of integrity of the judicial system, I worried that by just participating in it, I was giving legitimacy to something that was illegitimate. But I talked myself off of that ledge because I needed to make a living, and I convinced myself that I could still do some good.

“I like the idea of standing as an obstacle between a very powerful government and a powerless individual.”

What was your most memorable moment in the courtroom?
I have a funny memory of [arguing in front of the Supreme Court]. My client ran vending machines in Hawaii. His problem was that he had both a wife and a mistress, and was trying to keep them both happy. The law was overwhelmingly on my side for the Supreme Court argument, but the facts interested the justices quite a bit because the guy had such a colorful existence with the wife and the mistress.

So, they asked me some questions about the facts, and at the end they get up from the bench and walk through the curtains, and as they go off down the hall, Justice Scalia and Justice Souter were side by side, talking. They were walking down the hall and I heard them chuckling with each other, undoubtedly about the facts of this case. It struck a funny note with them and they were sharing a laugh, which is funny because they were philosophically at opposite ends of the Court and quite different in terms of personality. To me it brought out the human side of what they do.

Another memorable moment was the finish to the Wen Ho Lee case. We did the plea and the judge gave the sentence. Packed courtroom and you could hear a pin drop. Then the judge—the same judge who nine months earlier had locked him up—gives this speech where he apologizes to Wen Ho Lee. He says that he was led astray by the government, and that a wrong had been done to Wen Ho Lee. It was the judge on his own realizing that he had been misled. It was an exhilarating, awe-inspiring moment.

That case should have been a cautionary note — a lesson worth learning: how we jump to conclusions and demonize people from other countries. It was unfortunately forgotten in the chaos that came after 9-11.

Can you describe what it was like to argue in front of the Supreme Court?
I would say that was my best experience in law. Not because of the case. To stand at that podium where Thurgood Marshall stood, where every great appellate lawyer has stood. To look at the justices, answer their questions, interact with them. It’s hard to describe, but it was a very moving experience. It’s very quick.

Were you nervous?
I was intensely focused. I was immersed in the moment. Perhaps that’s a form of nervousness, I don’t know. It’s not like butterflies in your stomach. It was a wonderful moment.

“If I found myself in some godforsaken corner of the world in deep trouble, and I can make one phone call, I would call Oliver North.”

Who is the most interesting person you’ve ever met?
Ollie. I’m not making that up. If I found myself in some godforsaken corner of the world in deep trouble, and I can make one phone call, I would call Oliver North. He’s the kind of guy who would organize a rescue mission. He wouldn’t hesitate. He would just do it. He is a remarkable guy. Politically I am very much different than him. But in terms of his loyalty and willingness to put his life on the line for other people, he would do it in a heartbeat. We would come back from a day in court, exhausted. Some days were good and some days were bad. After a bad day, most clients just want to go off to their hotels, lick their wounds and let the lawyers keep working. He would rally us with jokes or encouragement. He is the most natural born leader I’ve ever seen in my life.